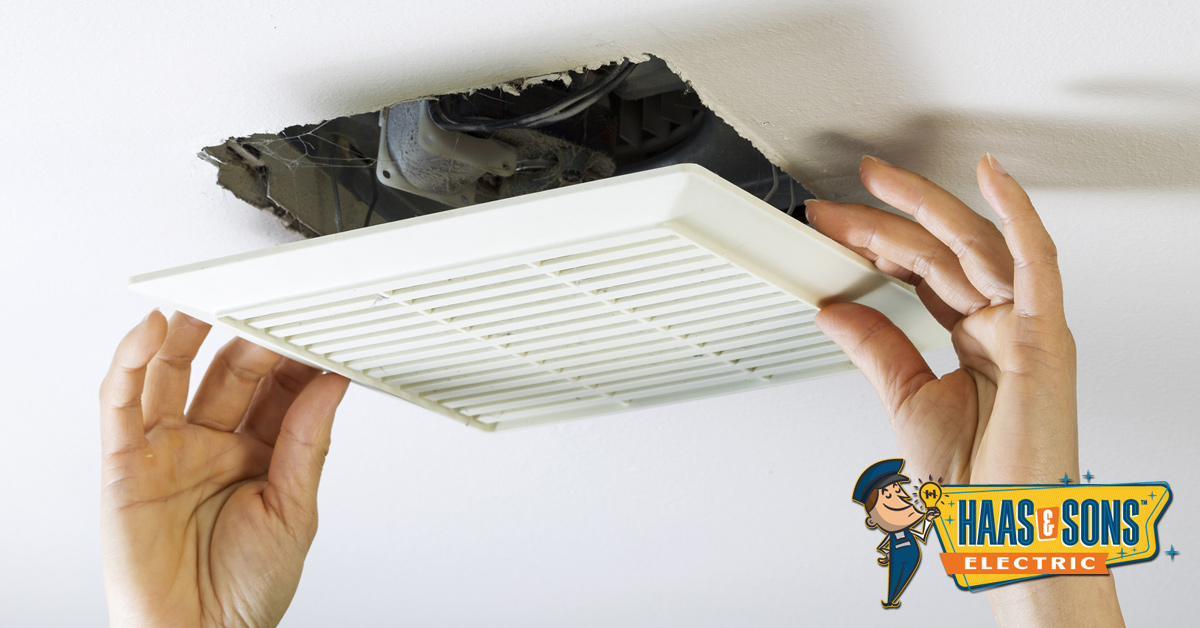 The bathroom exhaust fan may be the most overlooked but most important piece of equipment for the life of your home. The exhaust fan's main purpose is to remove the moisture from your bathroom, saving the drywall, tile and wood fixtures.

Frequently the homeowner will ask our certified electricians to replace the manual switch with a timer switch which will automatically cut the power to the fan after a 15- or 30-minute run. These fans do not use a lot of electricity however, the homeowner doesn’t want to discover that she left the fan running for the entire day when a few minutes would have been enough for the job.

A light bathroom remodel involving a new tub, or tub insert, a new vanity and a new coating of paint should include the installation of a new bathroom fan. Especially if the old fan is underpowered (as they often are).  An added benefit is that the new fan will pull out air or dust that occurs during the bathroom rennovation.

The size of a bathroom exhaust fan is based on the size of the room.  Our experienced professional will measure the room and plan accordingly.  For example, if the room is 60 cubic feet (width X length X depth), you will need a fan marked for at least 70 CFM . Many of the fans on the market today move 100 CFM or more.  That can clear out the bathroom in a hurry.  Although you don’t want the fan to sound like a revving jet engine, the decibel level is not super important.  That being said however, you do want it to be loud enough to muffle bathroom noises and loud enough that you can hear it running long after you would have forgotten about it.

Proper equipment for Installing a new bathroom fan includes flexible tubing to direct the air and moisture outside the house. If the technician is using existing tubing, he might have to make some adjustments in case the tubing is larger than the opening in the fan’s exhaust.  If that is the case, our certified electrician can tighten the tubing around the fan exhaust with zip strips then run duct tape around the tubing to secure it to the fan and ensure as little loss of air as possible.

If the system is new, our electrician will need to make a hole in the wall of the house that is slightly larger than the tubing.  Usually, our technician will then attach the tubing to a louver or flap on the outside of the house. The flap will be opened by the air being pushed out by the fan. The flap should snap snugly shut once the fan stops. The opening must close quickly to prevent squirrels and other wild animals from getting into the tube. These critters look cute in cartoons but are unwelcome house guests.

With the air duct and exit flap taken care of, the technician can focus on the bathroom exhaust fan itself.  Often the new fan is larger and more powerful than the one being replaced.  This means a bigger hole is needed in the ceiling. The technician will hold the metal frame for the fan up to the ceiling and draw around it with a pencil. Before cutting a larger hole in the ceiling with a drywall knife or box cutter, he must remove the old fan being careful to unplug the device first.

The electrician now is ready to secure the assembly to the studs in the ceiling. Since a bathroom exhaust fan is relatively light, four wood screws are usually plenty for the job.

The electrician pushes the fan into the metal frame and secures it with screws or with pre-manufactured clips. The plastic screen is pushed into place over the fan and fits flush with the ceiling.

Now it’s time for a final test on the wiring for the new bathroom fan. I good way to test this is to hold a piece of paper close to the fan.  When you flip the switch, the fan should create enough suction that it pulls the paper upward and holds it against the screen.

Job well done.  Not quite.  What about the wall switch? If there was previously a fan, then our electrician will inspect the switch and wires and make sure all is well. But if you are installing a fan where there wasn't one we will have to run the wire to the switch.

Finally, our electrician will test the whole system. He will turn the switch on, let the fan run for a while, then turn it off.  He will repeat this a couple of times. If we have installed a timer, he will set the timer and come back at an appropriate time to see if the fan had switched off as it should.

Now you can have a bathroom free of moisture and smells in short order. Your installation of a new bathroom exhaust fan is complete.

What is the best exhaust fan for a bathroom?

The best exhaust fan for a bathroom is a Panasonic multi-speed fan (50-80-110 CFM) with a DC motor with or without a light. The fans with the installation bracket allow for clean installation by minimizing any patching and painting as well as the least amount of potential complications.

Aside from Panasonic, the Delta Breez exhaust fans have really impressed us with their construction, quietness, and efficiency. These are our middle of the line fans we recommend to clients that want great quality and performance for the money.

The NuTone/ Broan line, while around for a long time, tends to trail behind other brands in quality. Even though they have a few expensive models on their lineup, we still consider them as the lower-tiered manufacturer as their brackets and housings feel thinner.

For more information on bathroom exhaust fans, contact Haas & Sons online today and one of our knowledgeable team members will be in touch shortly!

Do bathroom exhaust fans need to be vented outside?

Yes, the bathroom exhaust fan must be vented to the outside to be up to code. Venting into an enclosed space like an attic, crawl space or in between the floor joists could cause moisture build-up and lead to mold, mildew or rot.

The venting length for bathroom exhaust fans needs to be as short as possible with the fewest bends possible. It also needs to exit either through the side of the house or the roof of the home. Long runs of ducting will collect moisture and can drip back inside the home, causing water damage.

Poorly vented exhaust fans can cause plenty of problems in your home. Old fans that were not vented properly have been found to have an abundance of mold growing on the wood or insulation around the fan causing poor indoor air quality and allergy issues.

Powder rooms that have a toilet and sink are required to have a way to move air, either by opening a window or turning on an exhaust fan.

Haas & Sons is here to help with your bathroom exhaust fan! We provide unmatched quality service to every job we do, earning us the title of Your Neighborhood Electrician! Contact Haas & Sons online today and one of our knowledgeable team members will be in touch shortly!

What size exhaust fan do I need for my bathroom?

Exhaust fans are measured by their Cubic Feet per Minute (CFM) rating, or how quickly they can ventilate the air from a room. To determine what CFM fan your bathroom should include, we recommend:

You want to make sure there is air movement after a shower especially so your exhaust fan can help dry out the bathroom. Some homeowners might want to consider putting their exhaust fans on a timer or humidity sensor so it will run automatically.

To learn more about sizing the fan for your bathroom, check out our blog! or contact Haas & Sons online today

How much does it cost to install a new bathroom exhaust fan?

To install a new bathroom exhaust fan, homeowners can expect to pay around $800 for a full installation, including venting and the cost of the fan. The costs involved can be broken out as follows:

Heater exhaust fans tend to cost more because they typically require additional wiring from the electrical panel to the bathroom. In addition, they are required to be on their own circuit, which also adds to the final price.

For more information on bathroom exhaust fans, contact Haas & Sons online today and one of our experienced technicians will be in touch shortly.